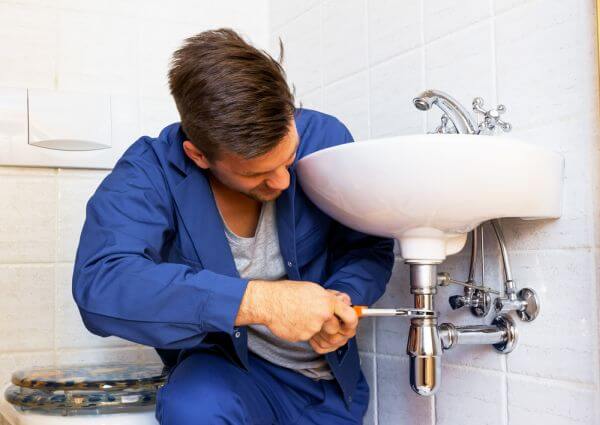 What is pipe scaling?

Pipe scaling is a term that refers to the build up of minerals and rust from inner linings of pipes. Some of most common minerals that build up are calcium carbonate and magnesium. With metal pipes slight scaling can be beneficial to prevent from corrosion. Allowing the scaling to build up will decrease the amount of water that can flow through your pipes and will prevent a lot of damage to your plumbing system.

Pipe descaling is the removal of accumulated minerals and rust from the inner surfaces of water, drainage, or sewer pipes. Descaling can also remove smaller roots that have grown inside the pipes. It is an important and necessary plumbing procedure in places where the water supply is full of minerals like calcium or magnesium carbonates.

Cast iron pipes tend to have more severe scaling because their inner surfaces become coated with iron oxide as well as calcium and magnesium salts. When a pipe develops a thick, uneven layer of mineral and rust deposits, it begins to snag any solids and grime that flow past the rough sections. Eventually, the pipe becomes clogged or blocked.

Luckily, descaling is a good way to clear pipes and restore them to working condition.

How to pipe descaling is done

There are two main methods used to do pipe descaling. The first is by scrubbing the pipes with abrasive tools or materials. The second is with the use of chemicals.

How a plumber chooses to descale a pipe depends on the extent of the blockage and scale buildup in the pipes. It also depends on whether the pipes carry clean water or wastewater.

After a plumber does a thorough inspection of the pipes, they will recommend the most effective descaling technique. Plumbers often use the following methods to remove scale buildup from pipes:

The plumber will choose this method to clear a pipe that is heavily clogged. First, they will blast a jet of highly pressurized water (water with a force of at least 3,500 pounds per square inch) to remove any blockage.

The descaling nozzle scrubs the pipe and washes away the debris at the same time.

A plumber may choose to remove scaling with the use of chemicals. They will choose this method if the pipe is relatively clear of other forms of blockage.

The plumber will simply flush an acidic chemical to dissolve the calcium and magnesium salts as well as the rust.

Why descaling is good for pipes

Modern descaling methods are a non-invasive way of clearing pipes, which means that a property owner gets to avoid the inconvenience and cost of dug-up yards and smashed walls.

Descaling also improves drainage and water flow while increasing the lifespan of the piping system.

If you are dealing with constantly backed-up drains or low water pressure, it is time to call the plumber. Chances are that they will find scaling in your pipes.

Ready to get started?

Get in touch with us if you need to get your pipes working as if they were put in yesterday.

Request an appointment here: https://www.bevillstexas.com or call Bevills Plumbing, Heating & Air Conditioning at (325) 225-4115 for an appointment in our Abilene office.